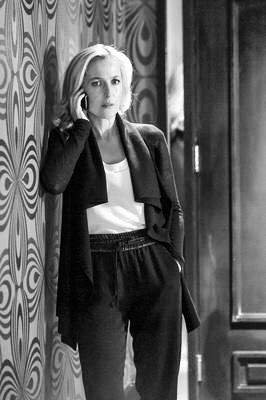 Now please bear in mind that the voice in my head currently has a strong Northern Irish accent, so it has… blame it on feckin Jamie Dornan from the Fall… Finally finished it, loved it, creepy, can’t go upstairs on my own!

The word Feck is not actually a swear word mother I promise. Ask my friend Emer, she put it to the test on many a school trip! Whilst watching The Fall I’m obviously thinking, hoping and wishing to be Gillian Anderson with her slightly too husky voice, long legs and great wardrobe – but deep down I think I’m more of the dark, dock martin wearing, little bit naughty and piercing my own nose before breakfast rebel! Gillian is obviously Gillian Anderson and I’m the weirdo! I think my husband’s got used to me on the meds… I casually called out to him I was getting in the dishwasher – he knew exactly what I meant! There are many similarities as it happens; it’s like a 30 minute, 40 degree spin cycle that knocks off your polish, your patches and probably your tan…

If we’re talking dishwasher analogies, I’m a like fine china coffee mug  (a bit pricey but can handle hot things) and he is a Pyrex pie dish! (a bit dated but you can take him anywhere)

Things I must google… One of those experts zoomed live into a TV studio to give my opinion on current affairs.. it’s never going to happen as I don’t have a really strong political viewpoint, I wish I did! It makes for a very peaceful home life but perhaps not required by the BBC. Right, becoming a world expert on a subject is going on my list! Please send in suggestions!

I have a new found love for star gazing… We have had the most incredibly clear nights where the skies were alive with satellites, galaxies and shooting stars everywhere  although it reminded me of being on a safari, transfixed trying to i-spy the elusive diamond rainbow – then everyone points and shouts there… did you see it? Of course I feckin didn’t!!! I now need glasses for long distance too! Or some +2000 binoculars!

As it happens I do know the BBC’s go-to subject matter expert in all things astrological and I think of her often when stargazing, wishing I could ask her about stars and satellites and owls and hot tubs!

Saw the most amazing rainbow the other day… they are truly spectacular when you see the whole thing – are you someone who chases the rainbow? Pulls the car over to take a photo or just find a spot to stare at it? Guess which I am… came out exactly as husband predicted!

Recently watched a lovely little film called “Marvellous”. Really good and recommend as a quick feel good watch – don’t expect anything too Hollywood but everyone should have Neil’s philosophy of glass half full. It’s got the brilliant Toby thingy in it… I can never remember names!

Who watched the BBC’s drama ‘Us’ – OMG… I’m slightly concerned this is us! Intense, over thinking, smothering parent… yep! Also, who doesn’t say to their children be careful crossing the road or drive carefully when they get behind the wheel? And butter their toast and do their washing?! 🙂

The Home Edit on Netflix is recommended by my daughter – I saw a clip and it put me off! It’s a whole load of New Yorkers drooling over clean closets. I did however allow her to Home Edit my fridge and my kitchen cupboards… obviously! Gillian has just been to the Med and I’m still on the Meds… so I decided on my own home edit and treat myself to a makeover.

MOUSEY!  No-one has ever chosen to be mousey… it’s what home dye kits were invented for!  I’m a walking Farrow and Ball advert! Feck!

I really spend FAR too much time on my phone. Texts, Emails, Social media. Googling! Nowadays my phone kindly lets me know just how long I’ve been on.  I would have time to write, paint and read more books – when they abolish social media, I’ll have all that spare time I’ll finally be accomplished at something!

At the beginning of lockdown I was playing a little online bridge, leaning Spanish on Duolingo and now look at me… I’ve downloaded every app going and I’ve spent a whole Saturday listening to the-saleroom.com and bidding on things I neither need nor want and I’m now having flutters on the feckin Tote!

I haven’t even finished the first one! Everyone is going about as if nothings happened I’m still in my pyjamas at midday and baking cupcakes! I think it’s a conspiracy – it’s because my back’s not better and I can’t even if I wanted to but I’d like to go out and dance in the street… I haven’t been “out out” since March! (except for a couple of birthday celebrations and they were heavily medicated & lubricated!) It was injected into by the lovely Dr Armstrong or as I know her Philippa! A mum from school, she texted me the night before so I was thrilled!  Until I realised she’d be seeing me in my bra & pants, which because I changed my mind on my outfit for the third time before 8am, to my horror I had different coloured underwear on!! She’s so lovely she didn’t comment (she probably didn’t notice through the haze of mask & visor).  Anyway after a little prick so to speak I really didn’t feel a thing but sadly it’s not quite back to normal – early days I suppose. Feck!

Things I will probably do instead…